It was Life or Death for Valentines Day

Valentines Day 2020 I will never forget. I awoke in the morning after a restless night uncertain what I was going to see in my bathroom. Was my Valentines Day going to end in tragedy?

A phone-call came in from the Cat Adoption Foundation that I volunteer for on the morning of 13th February 2020. It was a distressed call to ask me to help an extremely unwell feline that had been at the vet for a couple days.

After my last experience balancing a cat I was really unsure that I wanted to do this again.

But my heart lies with animals so I made the arrangements to pick up this ball of fur.

Unsure what I was going to face, I walked into the vet.

From what the foundation had told me, this cat had given up on life.

It is common once an animal has a paw in the other world, for them to just close their eyes and slip away. This was the reality I faced when I brought home the carrier with the cat I had only seen through the bars. Staring at me with green eyes.

At the vet, still filling myself with positivity I asked the receptionist all about the cat and she said she had severe renal failure and was not eating or drinking by herself at all. No major toileting (unsurprising for renal failure) either.

She was very ill and had been found in a park by someone from Lost Pets of South Australia and taken into the vet.

I was told that she had been on a fluid drip but they had seen this a million times before and that there was no hope of recovery and to take her home and make her comfortable. But my optimistic self checked if I could bring her back for a checkup the following week. There was really no reason to because she would not make it past the next couple of days.

Or so everyone thought.

Renal Failure in cats is when the kidneys responsible for filtering the blood from toxins, producing certain hormones, regulating electrolyte balance and water, become weak and unresponsive. When the kidneys pass a percentage of damage they rapidly decline and the animals body can no longer function. Severe dehydration and mal-nourishment immediately begins and is generally in most cases un-treatable. Caught early there is comfortable lifestyle they can lead for awhile.

This is what faced the cat in my carrier. She was advanced.

This was all I saw for a few days.

I cried when I reached in to pull her out. I had never felt an animal in such condition. There was no muscle lining her bones, just skin and fur. I could feel things a person should not be able to feel on an animal. The vet was right. She would be here for only a couple of days.

Her limp body lay in my hands as I transferred her to my balancing bed. This was useless I remember thinking, but as energy work requires complete heart-brain alignment and what energy you put out you receive back, so with this knowledge I had to reset the mindset I was in.

She laid there as I tried to find the energy frequency this cat was on so I could tune in to her and find what I was looking for. It was so erratic I couldn't hold it for long before losing the connection. It was so frustrating! But what I did feel was immense sadness and pain every-time our frequencies aligned. This was impossible I thought, but I continued.

For the short bursts, I was able to make out that her energy centres were completely immobile. So I figured I would get these spinning first so I could heighten her frequency reach to tap into her bodies central nervous system. Through the tears that I could not hold back I spun every centre with as much of my own energy as I could muster.

Albeit slow, they were spinning. I was able to do one more thing for her before I was depleted of my own energy, and that was a meridian trace.

Meridians follow the path of energy flow in our bodies for all our organs, and animals have them too.

When the flow is weakened we can function poorly and of course - no surprise there - her kidney meridian was the first to focus on. As her energy was in this world and out again I was unable to get a read on what she needed with that meridian so I just did every correction possible, including focusing on her acupressure points for it also. That was it for me, I was exhausted and so was she.

Stared into nothing and could barely move

I laid her in my lap and held her head up to give her fluids through a syringe and wipe some food in the roof of her mouth to make her chew and swallow.

I wouldn't leave her side

Every 2 hours that evening I repeated the food and fluid intake with her and kept the crystal that I had attached to her energy centre nearby at all times.

It was the longest night. I fell asleep for the last time in the wee hours of Valentines Day before the dawn cracked the sky. Her body was so weak that I was uncertain each time I put her to bed if the next time I walked in there she would be with me still. I arose tired and worn out grasping onto positivity like a life line.

I opened the door to see her lift her head and look at me. PHEW!

Valentines Day was upon us and the 2 hour feeding was to continue. She had her breakfast and back to bed again. Her green eyes would look at me every-time I walked in the door. It was a great sight to see.

That was when Valentine received her name.

Starting to move about and a small amount of playing

After a couple days of this she was looking stronger. I decided to give her the steroids I was given for her. I watched her deteriorate back to the cat from day 1. Her energy decreased and she became unresponsive again. I decided that her body was too weak for western medicine at this stage.

~ It feels like now is the right time to tell you to always follow your vets advice, I am a trained, skilled professional in animal healing and this was soley my call to take her off the medication. ~

A new diet of herbs from the earth were my go to from here.

She stayed on a strict diet of watery tin food, water with diluted Hydralyte in it, Metamucil as she had been trying to poop for a few days but nothing was coming out, Dandelion root for appetite stimulation, inflammation and digestive health, Cats Claw for boosting her immune system as her body was full of toxins. Cat Nip to help boost her mood from one of deep depression to uplift her spirits a bit, to help her fight back, and a very acute strong kidney tincture that had an array of concentrated herbs in it for a brute attack on the toxins and healing of her kidneys.

Every day I offered her food on a plate but my heart sung the moment she stood up one of those days and walked to her plate and ate food herself. Within the next couple days she was drinking by herself too.

We were out of the danger zone...and I could finally get a good nights sleep!!

I made an appointment to the vet again and made an appearance with Valentine. The vet had a smile from ear to ear to see us and there was much chatter about her body condition improving, but the best sign was when the vet felt for her kidneys and told me they had grown in size!! We went home with smiles on our faces (okay I was smiling, she yelled the car down).

Over the following few days I watched her improve. She grew stronger and surprised me with her new range of motion every day. She couldn't walk to well for the muscle deterioration in her body but she walked around everyday regardless to stretch her legs and explore her surroundings.

The next week we went back for a checkup and the vet took her bloods. We decided to give her a wormer just in case. She staggered around that evening barely able to walk again and collapsed back into her bed. She still wasn't ready for western medicine yet. The following morning however she improved and was up again staggering around.

The blood results had completely reversed and were all returning back to normal.

I was finally able to give her small balances to boost the herbs and keep her energy centred and flowing.

Just before we all went into lock down here in Adelaide, I took her back for a final checkup, the vet was so happy to see us both again. I admitted to him what I had been doing and saw Eastern and Western come together in that room that day. I had been debating on discussing any of this with him for fear of judgement and or disbelief in my trade. But I saw a man of science stand there before me without a worry and with a smile that still makes me grin to this day.

She had gained weight and her kidneys were back to full function. She was pooping regularly as well and had started curling up with me at night, with the strength to jump up on the bed.

She will always need a bit of extra care - but Valentine survived the killer of cats and every-night she reminds me how grateful she is when she jumps on my head for a cuddle. (sigh). I still got roses and chocolates from the husband too.

I must disclose that this kind of outcome is not guaranteed for any animal, every effort is made but sometimes it is out of our hands and our control.

She sits by my feet as I write this to you. My miracle cat that made my Valentines Day. 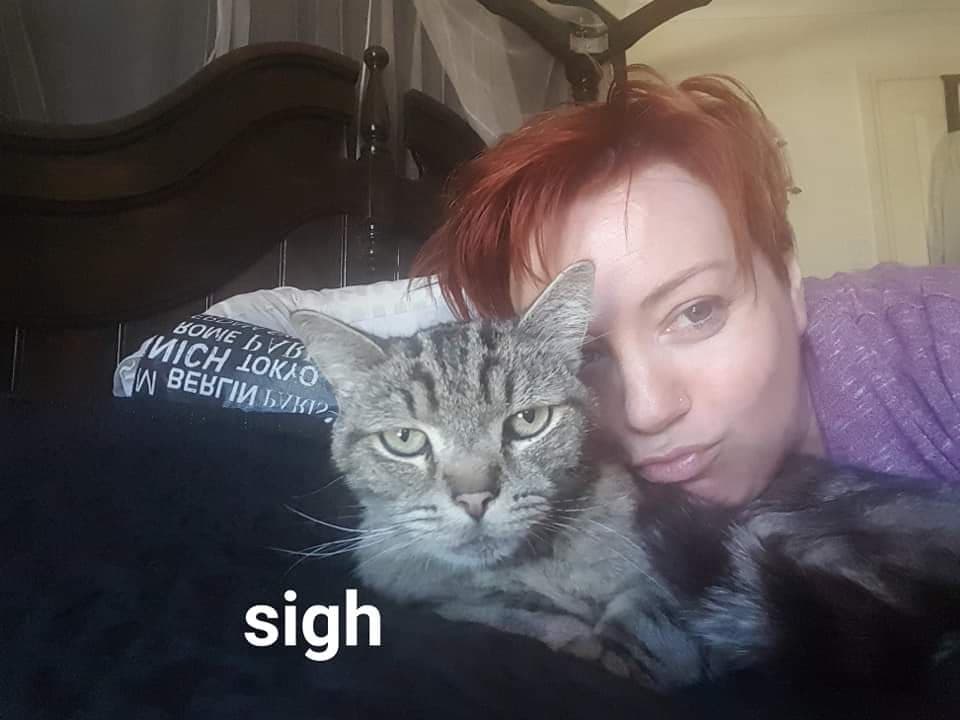 5 reasons you're not moving forward.